This music has been out of print since 1928, so it can be hard to find. Keep your eyes open, watch eBay, visit nearby university music libraries, and ask about their special collections. Be very nice to the librarians! A few places have finding aids on line, but -- and it's a big but -- you need to know what you're looking for, and the titles are rarely an indication of the quality or usefulness of the piece. Browsing through the actual music is the most efficient way of searching.

I have assembled a curated collection of over 90 arrangements. They are available from the Photoplay Music Starter Kit page. This will give you a basic toolkit with which to score almost any silent film.

A growing collection of scanned cue sheets, sheet music, and audio for silent films can be found at the Silent Film Sound and Music Archive. Searching is awkward, but many of the pieces are available as downloadable PDF files, and quite a few are arranged for full orchestra.

UNT has a very extensive catalog of photoplay music. Search for "Silent Film Music" at the UNT Digital Library for a list of scanned pieces that can be downloaded. Their physical collection goes way beyond these pieces.

The Music Library has several collections, not all of which are on line.

The Capitol Theater (New York, NY) Music Collection consists mostly of piano parts. With its 71+ piece orchestra, one would have expected the full orchestrations; and being one of the premiere venues in America for live-orchestra film (directed by Erno Rapée, William Axt, and David Mendoza; all of whom were involved in publishing the Capitol Music Series), it should be an excellent collection. Greg Breed, a San Diego area theatre organist, tells me that this collection was from the projection room where films were scored, so only piano parts were needed. The collection that was in the library for the full orchestra is now at The New York Performing Arts Library (see listing under that heading).

The Schnauber collection (originally from the Film Music Society) is stored off-site, and when you place an order they have to send someone out to find things -- so it's smart to place one large order rather than a bunch of small ones. The catalog is particularly detailed, and has authors, titles, and arrangers. If you click on a number, it will show you the orchestration, and often the catalog includes film cues that are pencilled on the first violin part.

The New York Public Library has a collection that originally belonged to the Capitol Theater in New York.

These are very helpful people. The Rader collection leans heavily towards classical music, but photoplay and popular music are scattered throughout. There are several other collections at SIUE that are not on line yet.

The Mirskey Collection at the University of Pittsburgh includes a lot of orchestrated photoplay music.

Drake University's Dorman Hundling Archive is a collection from a Newton, Iowa movie theater, quite comprehensive. They currently charge $1 per page, and can scan to PDF.

There are some small orchestra photoplay pieces at the Cleveland Public Library, which also has a large collection of popular sheet music. 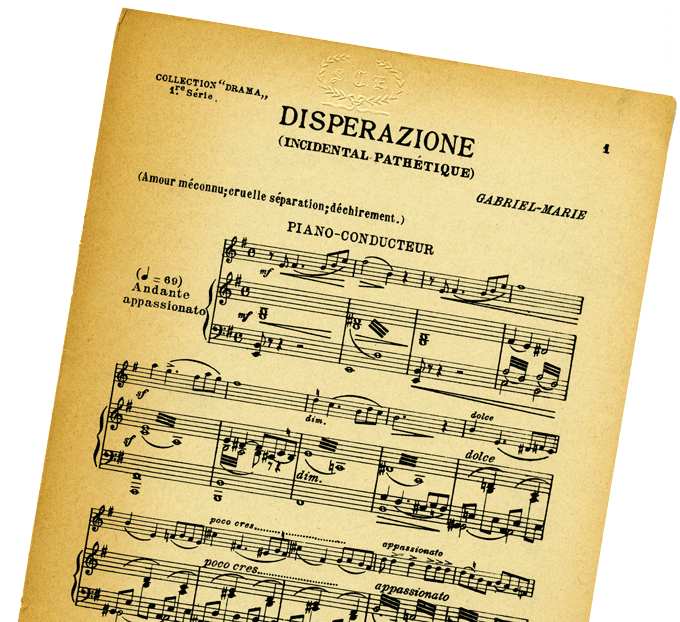 The biggest difficulty in creating compilation scores for silent films is finding the repertoire. These pieces have been out of print since 1929, so your best bet is music archives.